The official comics adaptation of the blockbuster 1975 film The Land That Time Forgot comes to a shattering conclusion! Stranded on the lost island continent of Caspak, Bowen Tyler, Lys la Rue, Baron von Schoenvorts and the crew of the submarine U-33 face unimaginable terrors in a prehistoric world out of time's abyss. But if they can somehow avoid death in the jaws of rampaging dinosaurs and escape the savage, human tribes of Caspak, can they overcome the very forces of nature itself and find a way off of the island before a natural cataclysm dooms them all? Originally published in 1975 by Marvel Comics Group, The Land That Time Forgot movie adaptation has been lovingly remastered for a whole new generation of comics and Edgar Rice Burroughs fans. 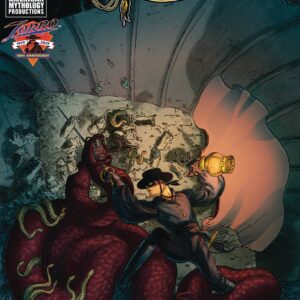 Zorro Rise Of The Old Gods 1 Cover A Kaluta